Green and Green – good for the environment, your wallet and the economy

There are currently 23 million light passenger vehicles registered for use on Canadian roads, with 13 million over 8 years old. The average lifespan of a vehicle in the 1960s was just less than 162,000 km. Today this is approaching 225,000 km. This means that Canadians can and often do keep their old vehicles on the road for years longer than they used to.

Recycling your older vehicle  can make a huge impact. By participating in Car Heaven you will support a Canadian charity, reduce your impact on the environment, save money, and support local green businesses.

With the introduction of new technologies, newer vehicles can be much more fuel efficient than their older counterparts. By keeping fuel consumption in mind, you could save 20-40% per year in fuel consumption costs by recycling in your old car for a new model in the same category. You could save even more than that by combining a conscientious driving routine with alternative forms of transportation such as biking to school, taking transit to work, or using a car share service for weekend errands.

Smog is a big problem in Canada and one which affects the health of all Canadians. In fact, in a recent report, the Ontario Medical Association (OMA) estimated that smog- related premature mortality accounts for approximately 9,500 deaths annually in Ontario. Across Canada, cars, trucks and buses are major sources of smog pollution, especially in densely populated urban areas. Smog-forming pollutants include nitrogen oxides, volatile organic compounds and fine particulate matter. Vehicles from 2003 and older can be up to 39x more polluting than a newer vehicle!

Improvements in the design of vehicle exhaust systems have reduced pollution from individual vehicles significantly over the past 25 years. Environment Canada projects that smog causing emissions, specifically HCs and NOx, from the total auto sector are currently in decline as newer, cleaner vehicles replace older, higher emitting vehicles in the fleet.

The auto industry has introduced five successive generations of environmental equipment on new vehicles. Today’s motor vehicles reduce smog-causing emissions by as much as 99% from uncontrolled levels.

By removing over 120,000 vehicles from Canadian roads, Car Heaven has reduced smog-forming pollution by 4,925 tonnes. 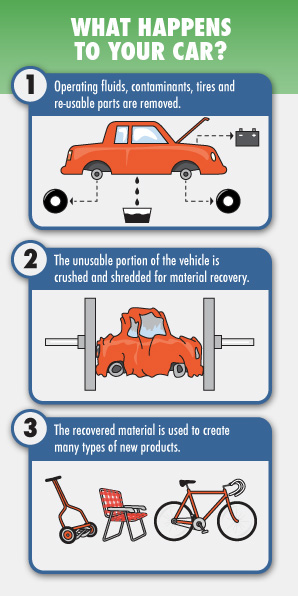 Your car is the largest and most recyclable product you own. No sorting required – the recyclers that work with Car Heaven will reuse and recycle over 80% of your vehicle and will make sure the remaining materials are disposed of responsibly. Responsible recycling keeps cars out of landfills and hazardous materials from being released into our air, ground and water.

Car Heaven is the only national end-of-live vehicle program dedicated to only using auto recyclers who comply with the environmental process guidelines as outlined in the Canadian Automotive Recyclers’ Environmental Code.

Once your vehicle has been picked up or received by one of Car Heaven’s participating auto recyclers, it will be evaluated by the recycler to determine if it can be re-used or if it is to be recycled at their facility in an environmentally responsible way. This recycling process happens in three stages:

Preparation of a vehicle for dismantling is vital to proper recycling. This includes the drainage of operating fluids such as oil, coolants, refrigerants and fuel, and the removal of the gas tank, battery and tires. It is critical that the draining and proper collection of fluids is performed to prevent any groundwater contamination. The average volume of operating fluids in a car is approximately 19 litres:

Once the fluids and other materials have been removed, they are re-used or responsibly disposed of.

Removed to a licensed recycling facility or used for energy recovery in approved used oil furnaces where allowed.

Re-used by the auto recycler, sold to their customers or removed to a licensed recycling facility.

All air-conditioning systems are evacuated by a trained, licensed technician. The used refrigerant is re-used onsite or sold to a licensed buyer for re-use or removed by a licensed recycling facility.

This component is either re-sold or removed by a licensed recycling facility.

Removed and collected and sent to Summerhill Impact’s Switch Out Program www.switchout.ca for mercury recovery and storage.

Depending on their condition and sales potential, parts and components are dismantled, reconditioned and sold to customers. This minimizes the need for manufacturing new parts.

Parts which are commonly re-used include engines, transmissions, whole front and back ends, body panels, and wheels.

To find Green Recycled Parts near you – autorecyclers.ca/find-green-recycled-parts

Once all the fluids have been drained and the re-usable parts have been removed, the automotive recycler employs the services of an automobile crusher to flatten the vehicle hulk. These flattened hulks are shipped to shredders which pulverize the car into fist-sized pieces in minutes. The valuable ferrous and non-ferrous metals are removed magnetically, and with complex floatation systems. The non-metallic components, known as Auto Shredder Residue (ASR) or fluff, are landfilled. ASR is composed of rubber, plastics, fabric, dirt, foam, glass and metal particles. That is why it is critical to ensure that the hazardous components are recovered before the car is crushed and shredded. Research continues to determine ways to reduce the amount of ASR diverted to landfills, both at the manufacturing and recycling stages in the life of a vehicle.